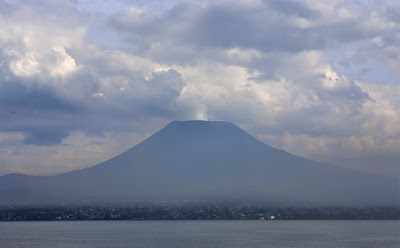 It’s 6pm, the reflection of the sun on the lake are stunning, fishermen move away increasingly from the shore in their small canoes by singing a few songs, the server offered me a plate composed of small fry mix, sambaza called here, and salad that arrived here on a scooter from the hills of Kibumba. I enjoy the fresh air on a terrace of a magnificent hotel in Goma. Welcome in the tourist town.
Administrative capital of the province of North Kivu, Goma town is built on the shores of Lake Kivu, at the foot of Nyiragongo, the volcano still active that sits on the town. 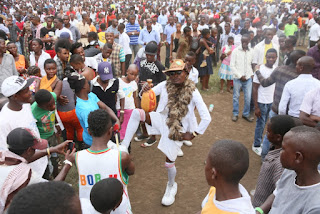 Thanks to the particular location it enjoys nearby exceptional natural sites, including the Virunga National Park, World Heritage Site, home to the famous mountain gorillas and incredible wildlife, Goma has kept its beautiful landscape at the foot of a superb amphitheater designed by a volcanic chain.
The city is located to the east of the Democratic Republic of Congo, a region in the media take reputation of the many wars and humanitarian crises that have crossed. But when one goes through the streets of Goma, one realizes very quickly that the dynamism of gomatraciens or Gomeens (a hitherto undecided controversy divided the real name of the inhabitants of Goma) is far from consistent with the image that one has the city from abroad. 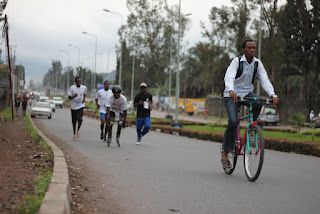 On the main road under construction, motorcycles, white cars humanitarian organizations to mingle Chukudu, a sort of large wooden scooters used for the transport of goods, and which over time has become a symbol of the resilience of people from the city.
Arriving in Goma for the first time, we are especially surprised by a thriving economy. New buildings emerge every day lava rocks of the volcanic eruption of Nyiragongo which engulfed nearly half of the city in 2002. luxury hotels built on the lake are havens of peace, which welcome tourists , journalists and humanitarian of all nationalities. 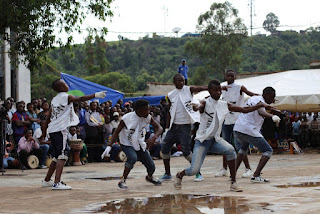 One reason to love the city of Goma, is its active youth, who is eager to forge a better future in a country torn by war. Young citizens' movements that initiate nonviolent actions to demand a future worthy, young artists who dream of building peace through their talents, Goma is the city of hope for the Congo.
Just attend one of these shows organized by young acrobats, traditional and modern dancers, singers in any genre, actors to make the obvious reality that the media does not often show: Goma is a city of dreams Goma is the city of "dream".