on March 31, 2016
This is the Soweto Camp Festival held at the Mofolo Park at Five Roses in Soweto, Johannesburg. I don't really want to bore you so much about the history of the camp. I'd like to introduce you to the camp and what we got up to.

Held over the Easter long weekend, this was the fourth year that the Soweto Camp Festival was held. It has not also moved to an even bigger venue. What started as a camp chair session between mates has now become an annual gathering with lots more lockers of things getting together to spend Easter together.

Here everyone is a neighbour. We all become a family and we share the little we have with anyone who might need something. 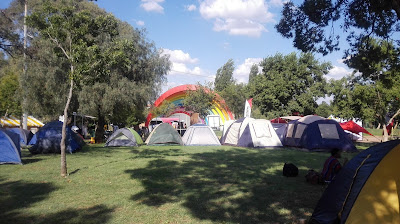 Ususally when I meet guys, they all scream TheSoloWandera. This guy I was introduced to him by a mate as Katchie and of course he knew all about me and my adventures. A Twitter friend who understands that the streets must know. 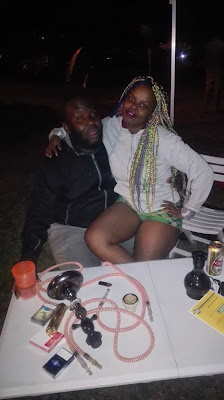 Each day ended with lots of music. Can't really say for sure whether the food was any good but we all shared out meals and kept warm around the bonfires. The park is next to a river so it gets a bit chilly in the late hours. Be prepared. 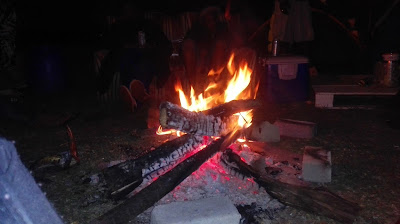 Now this was a genius camping idea if I ever saw one. These ladies had a blow up mattress. The mattress was too big for their 2 sleeper tent. So the mattress went below the tent. Problem solved. Then there was this guy. Nobody really knew what his name was. Even the owner didn't understand what his name was. All we knew was he poops everywhere and that's just fertilizer cos nobody is going around picking up after him. This guy's job was to transport you from your car to your camp site and load all your luggage in his carriage. So genius. No need to make a million annoying trips to the car. 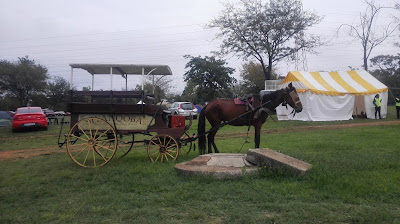 Then there was the #OnlyInLondon1804 camp site. These guys were ready for a fire party and a memorable weekend. They came equipped with all sorts of indegenous games. All were welcome to play and join the party. This is not your typical skipping rope. 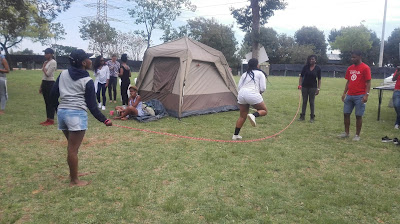 I have driven around Soweto more times than I care to remember. But never have I experienced Soweto in a way that was so thrilling. On a quad bike. The quad bikes were also available to anyone who wanted to just ride around the part at a small fee of course or if you wanted a tour of Soweto that could also be organized. I was able to ride all the way to Vilakazi Street. I know you know where that is. 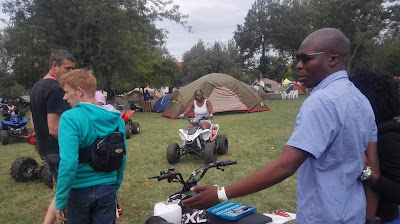 Then there were more indeginous games. 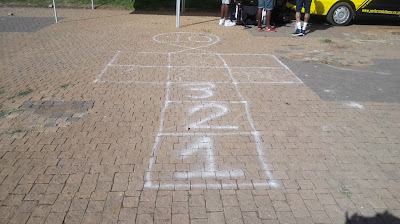 I guess we can never really be surprised when we see the solo wanders jumping around everywhere. I mean who do you know that has half the energy that I have who can do half the things that I can do in a day..
Hahaha don't be fooled my whole body was aching after this day. 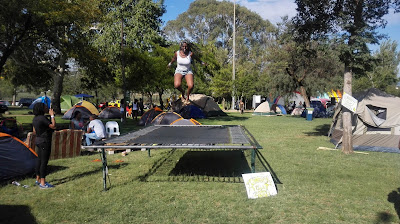 There were usually soccer matches all over the place. Boys being boys. That colourful dome was our stage. But not for the main event. At the park next door there was another stage set up for the main event. The organisers aren't the same as the Soweto camp fest organisers so that music festival was such a let down. But I got to see prokid perform and that afforked my crush on him.
Anyways, the stage below at 7 am turned into kareoke stage when you had to find creative ways to wake everyone else up for the typical township breakfast of fat cakes, poking and at chat. I will not explain that meal today but I will soon.
The match below was that other political party against them... 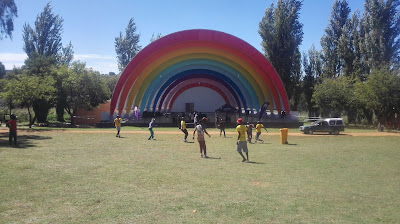 On this day, let's just say I woke up inspired to make bad decisions. And what's a fun weekend in Soweto without a visit to the Orlando Towers to cement your bad decisions. The idea was I was going to bungee but I ended up scadding. And that my dear friend is worse than bungee jumping. Inside that blue tower is a elevator. You get inside it and it takes you 70m to the top, drops you down. No harness or anything holding you, just your screams as you are filled with regret. It drops you 40m down and there is a net waiting to catch you. This will be the longest 3second drop of your life. Worst decision I have ever made and i would make it again. 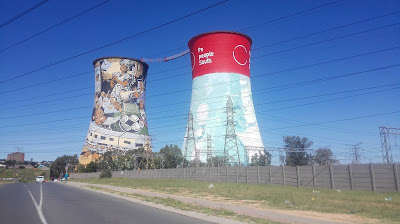 Well I did go camping alone but there's no way I woupd not make friends. I made sure that I knew majority of the people that were camping for the weekend. Some I met cos I approached and others approached me cos they figured they liked me - and would you blame them? I'm an awesome child. These boys became my camping partners and lovers of my colourful hair style. They opted for some Casper Nyovest inspired hair style. 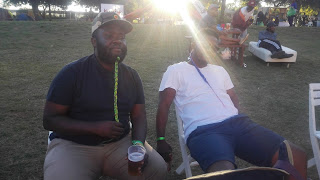 A lot of things happened on this weekend. And you might not have been aware that we were camping in Soweto. But now you know we do it every year and I know you will join me next year. Friendships were cemented and made, lots of meat was braaid. Beers were drank, jokes exchanged and tents were doing other funny things in the middle of the night. I don't want to over sell the Soweto Camp Fest to you. I'm just showing you how much fun we had. And how much fun you can have next year should you join us.