Charlotte the friendly ghost in the Midlands Meander 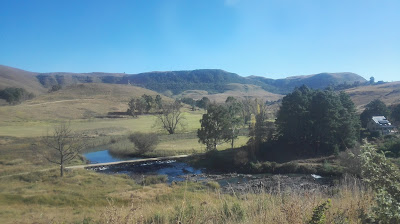 The thing about having family in KZN is, often when one travels to visit family you never really stop and explore the small towns that one drives past. To this day I still struggle to visit Durban and not feel guilty about being so close to family and actually not getting time to see them. I mean, one can only imagine how busy a travel bloggers life can be when there's lots of boys to drool over and plenty beer to sample... Never mind the delicious Indian cuisine found in the city.

I am currently on a road trip with some of South Africas top travel bloggers, travel writers, photographers and videographers and this time we stopped in Nottingham Road. No it's not a one road sleepy little village in the breathtaking Midlands meander.
Nottingham road is actually a small town. With breathtaking views everywhere you turn. With only about 2500 residents which is quite impressive in terms of growth compared to only having had 200 residents 10years ago. The small town where everyone knows almost everyone, the drinking holes obviously frequented by the same faces who enjoy their Nottingham Road Brewery craft beers on tap.

The Midlands Meander is also the wedding venue capital of South Africa, I mean, with over 49 wedding venues one wouldn't be surprised why it would be known as such. The weather is a bit harsh though, for my liking anyways. With warm days, freezing cold evenings and frosty mornings, you know I will be grumpy every morning. I'm not a morning person and I need my cup of tea in the morning to be able to pretend to tolerate humans. (this behaviour is totally acceptable for any functioning adult who knows and has accepted that adulting is a big sham and we were all fooled to think life as an adult would be easy. Of course the hot beverage of choice is allowed. Disclaimer: Beer doesn't count, you adults!!!). It is also the dairy capital of South Africa, with a speciality dairy farming and beef farming. You can also find some crop farming such as potatoes. Also the Michael house school is in the area. There seems to be a lot of money in the area because private helicopters are the order of the day. Imagine what weekends looks like when the schools have sports days and all the parents fly themselves in to come cheer for their off springs.

With so many wedding venues accommodation and things to do while visiting the area is not an issue. We got to go drinking at the bar at the Nottingham Road hotel, the greatest bar I've ever drank from in my opinion. This bar is pet friendly. As I walked in I made a new friend. A giant 10month old great dance (I'm a terrible human so I forgot his name), but in human years he will be 1 year old in 2 months time and when he turns one he is getting his own bar stool. That's so awesome though😎 I mean they get to have a party for this giant hound and he will be so much bigger. I mean who needs an excuse to drink?!?

Speaking of the Nottingham Road Hotel, it is owned and managed by Clive Foss and his wife. They have 24 rooms and room 10 is the most interesting room. I don't want to say the room is haunted because that gives the idea scary things would happen to you in the room but let me tell you about Charlotte the ghost. The girl you will share room 10 with.

Charlotte is said to be a lady of the night. Others say she was a chamber maid. I have concluded that Charlotte was a chamber maid who believed in happy endings. Anyways, Charlotte fell in love with a soldier who went out to the battlefields was killed (cue dramatic Sad music). From being heartbroken Charlotte jumped out the window and subsequently died from her injuries (sad dramatic music keeps playing). 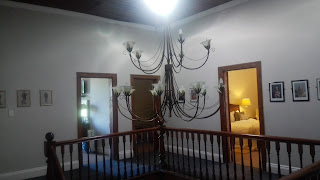 Charlotte doesn't mind sharing room 10 with you she just doesn't like you being messy. And sometimes she just loves a good party. There are a few things that Charlotte does:
For instance of you walk into the room and leave your luggage in the bed, Charlotte will remove your bags off the bed and unpack your clothes and pack them neatly in the cupboard provided in the hotel - as any good chamber maid would.
She could gladly run you a bath but sometimes you not ready for a bath but she will open the taps for you anyways.
She will turn on the tv - I'm sure she it took her a while to figure out the new fancy flat screen TVs.
Charlotte also plays the piano. But not like I can play twinkle twinkle little stars and its soothing. She just goes and rams all the keys and make unbearable noise. It's a party now!!! (in my head anyways). 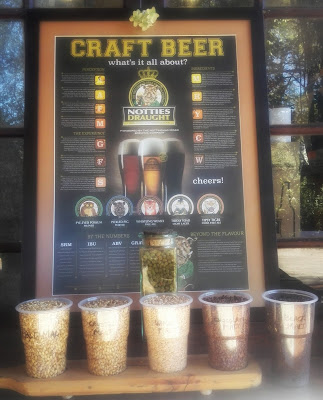 You can also visit the Notties brewery, get a tour of the brewery and do a beer tasting. They even have a hotel on the property so you can drink until you drop and run around their fountain and across the courtyard to your hotel room. Their bar States at the entrance that "Strictly no Bulls Parties" and they also know that "Real women drink beer" - cheers.