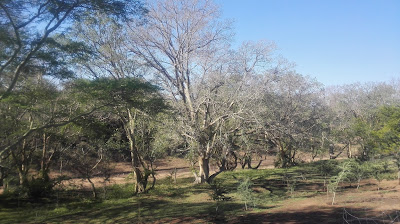 I recently Spent some time at the Zululand Rhino Reserve. We stayed for 2 days and that meant 2 game drives each day. And I mean, those game rangers were knowledgeable and good looking. It's Always fun to learn from someone you secretly drool over isn't it?!? Okay, I kid. I joke.


The Zululand Rhino Reserve is a Big 5 reserve developed to protect the indigenous and endangered species in northern Kwazulu-Natal.


This post will share with you some of the animals we got to see while on the game drives. This is a private reserve and you need to bear that in mind and self drives are not allowed. Except when driving yourself in and out of the lodge.


This is an ostrich egg. 🐣 it is not uncommon to find ostrich eggs abandoned. The male can impregnate up to 4 or even more females. As the eggs are laid, both male and females take turns to incubate the eggs till they hatch. During this period the male may neglect a few eggs and it is usually the eggs of the last ostrich to lay eggs. The abandoned egg will just be left to rot. If you are to compare an ostrich to a chicken egg, about 12 chicken eggs can fit into one egg. Now you can just imagine what a rotten ostrich egg would smell like 😂 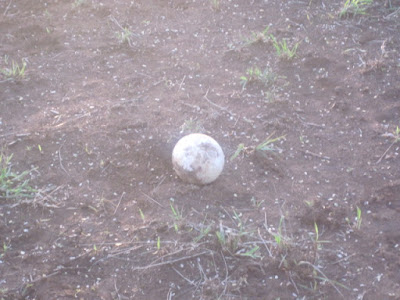 I have seen ostrich in the bush numerous times. But I still find it hard to believe that these could be wild animals. I mean what animal would be brave enough to try hunt an ostrich? Have you heard about this birds kick?!? The ostrich is the largest and heaviest bird in the world. It can weigh up to 145kg and that means because of its size and weight, an ostrich can't fly. But she can run, and I mean run fast. So don't try her. 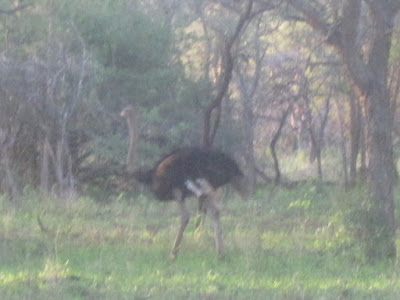 A Waterbuck is a rather large antelope. They are easy to spot, they have a huge white roynd target 🎯 on their bums. You usually find waterbucks in groups made up of a few females, the young and dominant male. The males are very territorial and protective. It is also scommon for the males to kill each other in confrontations.
The waterbuck gets its name from always hanging around the watering hole(like some friends we keep). So if you see one of these guys, you are most likely close to a watering hole.
Also just learned that the Swahili name for a waterbuck is Kuro. 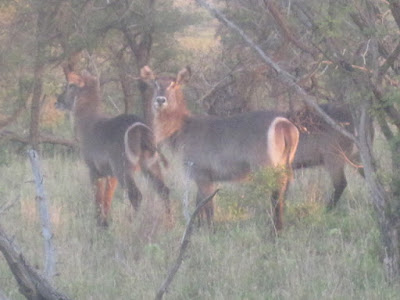 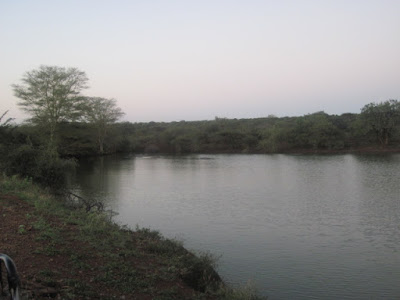 And then we have wild dogs. This bunch is lazy just from my experience watching them. And they love catching a tan.
Did you know that wild dogs are currently endangered? With only 250 left in the world that are still alive? 5 of 250 are residents at the zulu land rhino reserve and they are tagged and constantly monitored by Wild Life Act. More on why would dogs are endangered here. 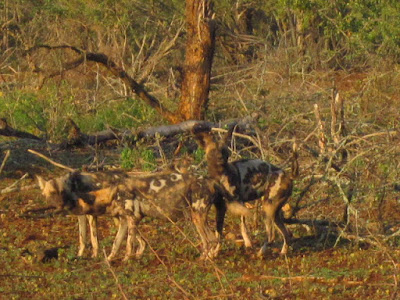 When it comes to wild animals, I have a few favourites. Giraffes are definitely a favourite of mine. When you see a giraffe, you can always tell the male from the female from looking at their skin. The male has darker spots and the female is lighter. Before you start looking at the horns and confuse yourself. Look for the easiest way to spot these. 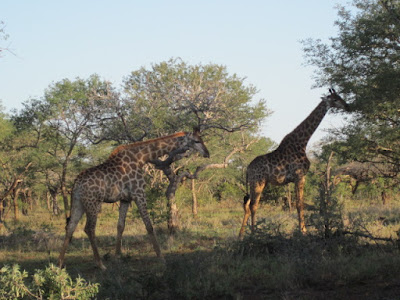 This is a wildebeest. You often see these guys grazing with zebras in the same area. They work together for heightened awareness of potential predators. These guys have a good sense of smell and the zebras have good sight. This is what they mean when they say" "team work makes the dream work". I always look at wildebeest and wonder why these guys look like they lack personality, apparently they are such intelligent  animals they can also take warnings from other animals when danger approaches. 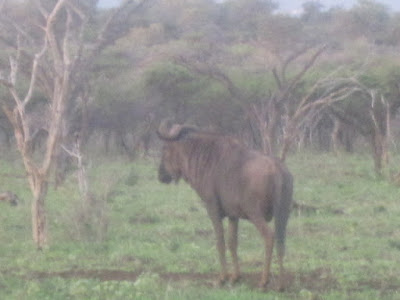 I am annoyed at myself that it took me a while to realize this is a Kudu. I was not sure if it is a Kudu or an Eland. I have such difficulty with some of these antelopes. Please go Google the differences between an Eland and a Kudu. Although a bit confusing when you don't see them in the same place or at the same time - common and giant elands have long horns, and of a giant kudus are far longer. The shapes of their horns are visibly different, while both have spiraled horns, eland horns curl in two extremely tight twists, whereas kudu horns spiral in 2-1/2-inch-wide twists. 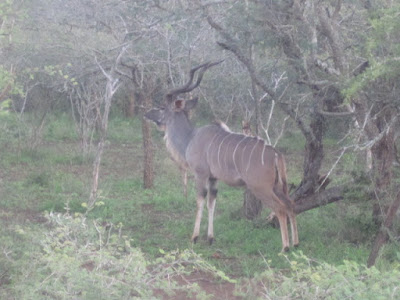 African wild dog. The African wild dogs are currently an endangered species. With only 250 left in south Africa. Unfortunately these creatures are very naughty and they don't like staying within nature reserve or game park boundaries. They break out and start feeding on local community livestock. Although the damage is not significant, the farmers would rather kill the wild dog before it kills his livestock.

This guys live in packs and always take care of each other.. Each pack will have a mating couple, the female will birth between 2 -20 off springs that the whole pack will look after. The other dogs in the pack do not start their own families they just stay together in their pack and live happily ever after. 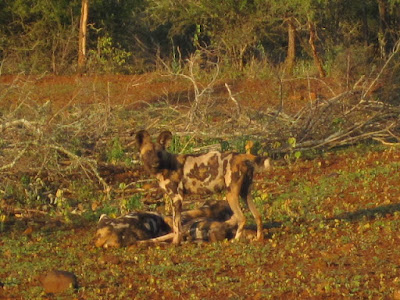 Impala is what they are known as. But as you travel and share experiences with other travelers after a game drive the response that most people don't know what these animals are called and they end up referring to them as cartoons. So yes this is Bambi and family. They are always everywhere. No ways you could go for a game drive and not see these guys over and over again. It was actually mating season while we were at the Zululand Rhino Reserve - everywhere you go you just hear funny noises of the male trying to get the female to give him 2 seconds for a poke. 2 seconds I tell you - stop laughing. 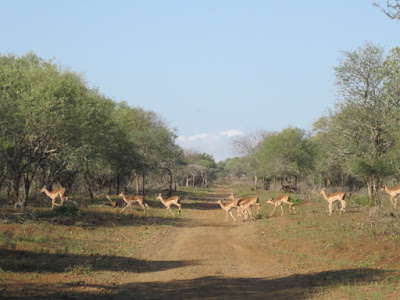 This is what Marula trees look like when the elephants have had their ways with them. Elephants eat the leaves, branches and also the Marula fruit. Marula fruit are used in the making of the Amarula liquer that is so popular in Southern Africa. Marula trees are mostly found in Southern Africa and Madagascar, the distribution of the tree has followed the bantu people in their migration as the fruit is important to the diet. (Keep an eye out for the Marula festival that happens in Limpopo later in the year). Elephants also play an important role in distributing the tree as they eat the seeds and plant them elsewhere when nature calls - you know exactly what I mean. 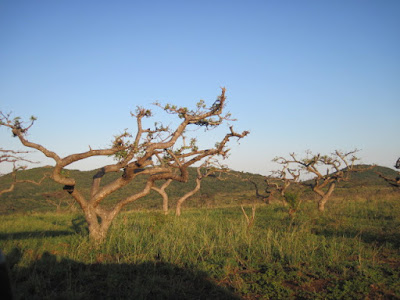 Check out the Zululand Rhino Reserve on their website http://www.zululandrhinoreserve.co.za/