Although getting to Cap Angela can be a full day outing from Tunis, you can also get there from Bizerte and will definitely will be cheaper. Cap Angela is in the middle of nowhere so you will have to hire a car. It is cheaper to hire a car with a driver than it is to hire a car to drive yourself, i guess this is because of the insurance. As for an english speaking driver, well i cant promise for you to get one but they are hard to come around in Tunisia, you can ask for one but chances are he only just knows the basics. 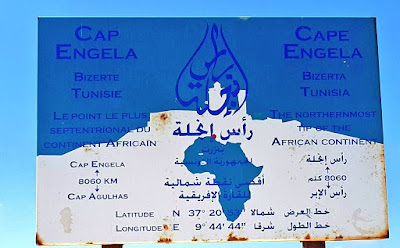 The roads are really good but the last 4km or so is on the gravel road. it is not a bad road either as a small sedan can get you there. you don't need a 4x4. The road after Bizerte is a beautiful scenic drive through the Tunisian countryside, line with olive farms and never-ending pine forests.

I often joked that the Tunisian countryside reminds me so much of South Africa. We have mango trees everywhere you go, Tunisia, on the other hand, has olive trees. Olive trees will be planted in fine lines across olive farms but also in bushes you see these old olive trees with caves in the tree trunk.

Olives are a big deal in Tunisia, you can never have a meal and there will be no olives on your plate. Peoples backyards in the countryside are lined with Olives. you can also come out to do the olive farm tour around October just before the brutal winter kicks in. that is the time when olives are being picked.

Nothing much happens at Cap Angela, it's just a rocky side of the Mediterranean ocean with a stunning statue and a small beach which the locals come to for a swim in a secluded area. Packing a picnic is a fantastic idea as you might want to be out here all day. Also, bring an Umbrella as there is no shade anywhere close by. 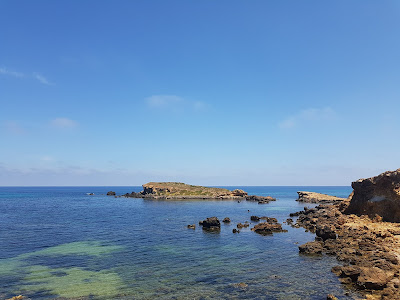 There is a lighthouse also in the area just above the beach, you are not allowed anywhere close to the lighthouse and the guards are not the friendliest of people. yes, I wandered there solo and I was chased away.


Bring loads of drinking water, some of the locals to set up their fishing roads out here as well but I am not so sure how fishing works considering that the Mediterranean Ocean is so shallow, you have to go a bit far to at least find some depth and fish cos the water is crystal clear and I never saw any fish while swimming.

Sunscreen is a must. you can wear your flip-flops but the walk from the car parking to the statue and the beach is a bit rocky. It's no more than 100 meters so you won't necessarily need hiking boots but comfortable shoes are highly recommended.