Sao Tome and Principe are Islands on the Gulf of Guinea (part of Atlantic Ocean). They are 2 volcanic islands. Sao Tome is the largest with the Capital city being named after the country - Sao Tome.

Principe is where 10% of the population of Sao Tome and Principe live and it’s a World Heritage site.
Sao Tome and Principe is Africa’s smallest country. Majority of the population belongs to the Roman Catholic Church with Traditional African religious practices and beliefs widespread, even among adherents of other faiths.
You can only access the island from Lisbon in Portugal (Flight goes via Accra), Accra, Luanda or Libreville.
According to Euro Monitor, as of 2013, travel and tourism is the main economic influence in São Tomé and Príncipe's GDP growth.

You will need to produce a yellow fever certificate upon arrival for Sao Tome and Principe. You can apply online for a visa which means nothing really, it's just an email document that you won’t need to produce on arrival. You will pay USD 30 or EURO 20 at the border for your visa which will be valid for 2 weeks. They will ask you to prove that you know where you are going to stay, I had booked accommodation on Airbnb but you can just google and screenshot any hotel and they won’t even inquire further.

There is plenty of accommodation options but unfortunately, you cant google the affordable stuff as you just won't find it. Most of the smaller hotels and lodges are listed on Airbnb and there is an option for every budget. from USD9 - USD250 depending on what you like. some of the places won't mention that they are hotels and seem like houses just offering a room. I stayed at the Cocoa Residence and some of the guys spoke English. It was a 10minute walk from downtown and across the road from Kizomba nightclub.

If the beach bumming does not convince you to run to #SaoTome on your next holiday, let it be the food. By far the best food in West Africa for me. There are a lot of fresh vegetables, herbs are mostly used in food preparations and spices often avoided. A meal consist of at least 4 courses before your mains 😍 This is Lombinho de Peixe - fish with chopped vegetablea (cucumber, onions, pepper, carrot, herbs in vinaigrette dressing). The fish roasted and dried, vegetables are finely chopped but not cooked and become softer by being left in the dressing for a few hours. #BreakingBorders #Thesolowanderer
A post shared by Katchie Nzama (@thesolowandera) on Oct 27, 2017 at 11:01pm PDT 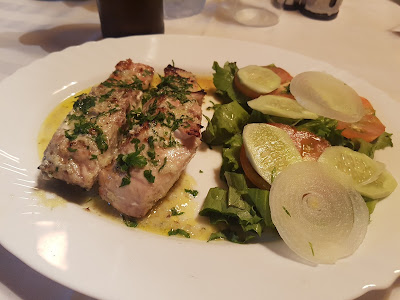 OOOhhh my!!! the food in Sao Tome is amazing. Fresh fish everywhere. The portions are very generous so you will not finish a meal in one go, helps that I can save for the next meal and just finish my meal from earlier.
Stick to bottled water. The tap water is ok to brush your teeth but not to drink. Nacional is the local beer, rather light. Brown bottle no branding. This bottle bothers me honestly. But it's affordable depending on where you are drinking!
The local beer is called the "Nacional", which is just a brown label that is not marked.

One for the road... This is the Nacional beer. The #SaoTome brew. The beer has no branding on the bottle or the lid. Just a brown bottle. Most of the beers in Portuguese colonies are beers from Portugal. The Nacional is a light beer. #BreakingBorders #Thesolowanderer
A post shared by Katchie Nzama (@thesolowandera) on Oct 29, 2017 at 6:03am PDT

Sao Tome and Principe islands are tropical with temperatures ranging from 27 degrees to 34 degrees Celcius all year round. Sunscreen and more sunscreen and loads of water will be essential. There's a beach everywhere you go.

The Sao Tome Dobra (STD) is attached to the EURO at EURO1 – 25,000 STD. the ATM’s do not take foreign cards. In order to withdraw you have to go inside the bank and you need to have a credit card. Best just bring loads of cash in USD or Euro. Every vendor does take payment in euros. For your cards, stick to Visa and Mastercards if you have to, anything else won't get you far.

EcoBank is available on the island but for withdrawals, they only take Visa cards. no one speaks English in the bank, bring your best sign language and drawing skills if your Portuguese is not up to scratch.

There are no places to change currency at the airport, make sure you do not walk out of the island with the local currency as you won't have anywhere to change it. No country recognizes the Sao Tome and Principe Dobra as a valid medium of exchange. Should you have any Dobras left, ask your hotel to swap them for Euros. 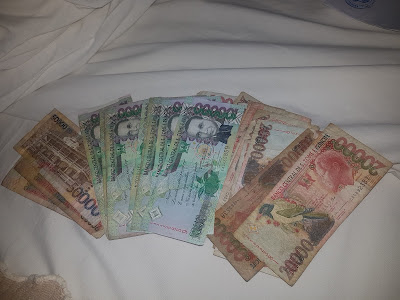 My hotel had a decent internet connection so I didn’t buy a local line. The island is good for a short stay as there is not much to do but beach bum and sip cocktails so a mobile line is not necessary, in my opinion.

I flew into Sao Tome on Tap Portugal, it is a 2hr flight from Accra. The flights are every Sunday, Tuesday, and Thursdays. I flew out of Sao Tome into Gabon using Afrijet which is a 55min flight. Be warned that Afrijet is never on time and they do not owe you an explanation.
The local transport around Sao Tome is the motorbike taxi. There are yellow taxis available for longer distances should you want to hire a car with a driver for a more private exploration od the island. You also have the option of using the yellow buses which you share with other travelers that go longer distances but they do not move until the bus is filled up. Depending on the time of travel, in the late afternoons, they tend to be overloaded.

Kizomba music is everywhere in the club scene like all other Portuguese colonies. The people do party hard but I did not see any dancing or hear any dancing music besides kizomba which can get awkward when you are alone. 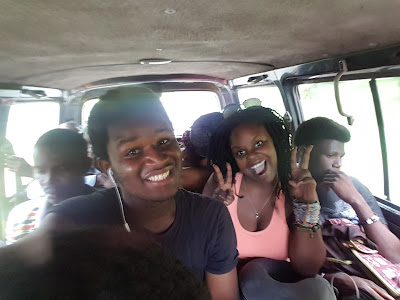 The island people are very friendly and welcoming. They speak Portuguese and you will be lucky to meet someone that speaks English during the day on the streets. Bring on your sign language and google translate when necessary.

Now that we are ready, start dreaming of that black beach holiday as it awaits you.